Three of the weirdest things I've put into my subconscious.

I've been having a series of really strange dreams lately. I was trying to figure out what might be contributing to them. The first thing that I thought of was the book I'm reading lately (I'll get to that later). Then that translated into thinking about the absolute weirdest books I've ever read. So here's my top three.

Kafka on the Shore --Easily the number one spot right now. My friend MB (find her blog here) tried to introduce me to Murakami ages ago with the The Wind-Up Bird Chronicle. I'm not sure what it was with that one, but I couldn't get into it. Kafka, however, had me by the first paragraph. It's a beautiful, melancholy story about regret and memory. I think. Murakami writes beautifully, but it's one of those books that I feel would benefit from multiple readings.


House of Leaves --I read this one years ago, after a off hand comment from an acquaintance. I remember specific scenes very vividly, but others have grown hazy. It's a novel about obsession. Now, I admit I have an overactive imagination and I tend to get sucked into things pretty completely. But while reading this book, I think I did go a little crazy! It's got multiple story lines as well, but the most unique part is the typeset. You never know what layout the next page will be, there are footnotes that lead you on crazy chases around the book, and there are hidden codes in letters from characters. I got so sucked into the book, that I felt like the main character Johnny Truant.


Example of a page from House of Leaves (Notice the mirror image in the middle, and the footnote on the left hand side and bottom.  The one on the bottom right corner is also in mirror image). 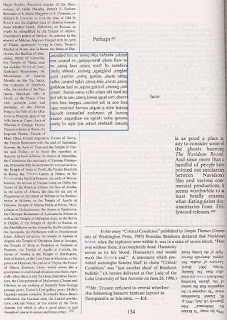 Rant: An Oral Biography of Buster Casey --Another from one of my favorites Chuck Palahniuk. This one is another non-traditional format, sprinkled with interviews about Buster, scientific reports, and some of the scariest stories about Rabies I've ever heart. This is a new disease added to my terror list! It comes with the territory you expect from Palahniuk: weird sexual issues, sections that make you squirm, and a bizarre story line. I'm not going to say it's his best work, but it's the on that has stuck with me...and I have a feeling will stick with me forever.

So what do you think of these books if you've read them? What's the trippiest thing you've ever read?
Posted by Witless Exposition at 1:29 PM

Rant was a great book...if I had every done acid that totally would have been my flashback. Actually...that statement makes about as much sense as the book does but, it was a pretty awesome ride.

An acid trip does sound a lot like the book. Every time you think "That's as weird as it's going to get," another crazy thing happens.

I really quite liked Kafka on the Shore! I was hooked and ripped through it in a short time. Definitely a bit trippy, but in a charming, sad way.

The trippiest thing? Kerouac's The Subterraneans in one go, right before bed. That gave me some fucked up dreams.

It is hard to describe Kafka's mood. Charming and sad, I very much agree!

I'm scared/intimidated by Kerouac (and all other Beat Generation guys). I'm afraid my vanilla middle class life stands in the way of my enjoyment. :)

I haven't read House of Leaves but Rant and Kafka on the Shore are both REALLY crazy.

You should read The Wasp Factory by Iain Banks next if you want something really trippy. I read it in high school and I still lie awake in bed at night thinking about it sometimes.

Truman Capote said about Kerouac's On the Road, "This isn't writing, it's typing." I tend to agree. I don't care for Kerouac at all.

I think I might have to take a break from trippy stuff. Let my mind resettle. :) I'll have to keep all of these on the list!