Mini-Reviews! (Or all the guilty pleasures I've devoured lately)

During my hiatus from blogging, I've read several guilty pleasure books.  You know, those books that are so much fun, but you wouldn't want to read next to the person who brought Proust on the airplane (no really, there was a lady reading Proust on her way to Costa Rica).

Since I have three books backed up on the review train, I thought I'd give them a very short review.  Hope you enjoy and I've tempted you enough to pick them up! 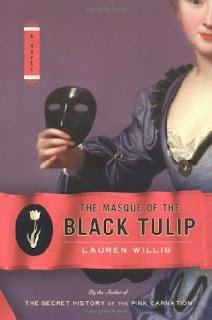 Guilty Pleasure Meter: 8/10
The Masque of the Black Tulip is the second in the Pink Carnation series. It follows the story of two side characters from the first novel, Henrietta and Miles. I found Henrietta a very refreshing change from Amy in the first novel.  She's more level headed and intelligent.  Miles is also very charming as the protective big brother figure that suddenly realizes that "Hen" is a woman.

I felt that Eloise (our modern heroine) was better drawn this time.  I'm starting to like her more as I read about her, although I still have a very hard time remembering her name.

The plot was fast paced and fun (although some parts were very predictable), and some new very intriguing characters were added (my eye's on you Lord Vaughn).  I started the next one as soon as I put this one down. 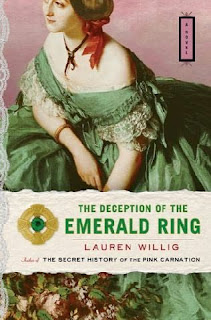 Guilty Pleasure Meter: 9/10
The Deception of the Emerald Ring is the third book in the Pink Carnation series.  I really enjoyed the different approach this book took.  Instead of a love connection, the main couple in the book is forced to marry, even though they don't love each other.  We see them struggle and fight between chemistry and terrible misconceptions about each other.

Letty is also rather refreshing.  Although she's given a great rack, she isn't considered a beauty by anyone.  She's too short, too plump, and too freckled.  She's also terrible at lying and intrigue.

Some of the plot points seemed a little rushed or confusing at times, however it was still a great, fun read.  Thanks, Jamie, for turning me on to this series! 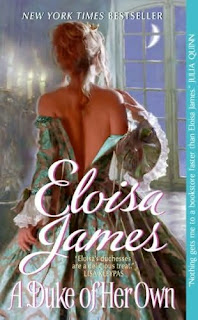 Guilty Pleasure Meter: 10/10
A Duke of Her Own is actually the last of the Desperate Duchess series. It was my randomly chosen romance novel for my 101 in 1001 challenge.  Based on the reviews from Amazon, it's the best of the series, so I'm glad I picked this one up.  I actually started reading it about 8 one night and finished it a few hours later.

It's the perfect guilty pleasure book: great heroine (although the back of the book makes it a mystery as to who the heroine is, you know in the first chapter), a Byronic hero with a heart of gold, a standard romance plot with interesting variations, one or two steamy scenes, humor, and one or two scenes to make you tear up.

A fun, quick read, that's more regular novel than the cover would make you believe.
Posted by Witless Exposition at 10:52 AM

Email ThisBlogThis!Share to TwitterShare to FacebookShare to Pinterest
Labels: 101 in 1001, A Duke of Her Own, book review, espionage, Lauren Willig, reading, Regency, romance, The Deception of the Emerald Ring, The Masque of the Black Tulip

I'm so glad that you are enjoying the Pink Carnation Series. Now you have to read the Lady Julia Series by Deanna Reyborn. She was a teacher before following her dream of being a novelist; it's impressive to read her progression as the series goes on.

Just finished the Crimson Rose one! Really liked it, too, even though it was a bit of a slow start. I'm going to have to pick up that other series, too since I'm almost caught up with the Carnation.