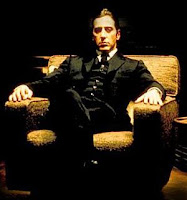 Well, except for the killing, the dead first wife, heading a ring of illegal activity...

Ok, so maybe not exactly like Michael, but close enough.  I've been dragged back in to something that I thought was put behind me, World of Warcraft.

While the Bear Monk and I were still in college, and young newlyweds, he started playing WoW.  Being the sweet and indulgent wife that I was back then, I picked up the game eventually.

And hated about 99% of the game.  I found it dull, repetitive, and infuriating on just about all counts.  However, before I get slammed with comments, let me put this into context.  I was playing on a PvP (Player versus player) server, which for you non-gamers means that anyone from the other faction in the game that wanted to (because I really suck at PvP) could kill me.

It was not that uncommon for me to be corpse camped for 20-30 minutes at a time, reducing me to tears.  TBM tried to help as much as he could with his maxed out characters, but there's only so much that can be done when a jerk has decided to make you his target.

I was also about 20-30 levels behind all the people we played with, so I was always questing by myself or being run through whole zones in a few hours.  I would click to accept a quest, never knowing where I was going or what I was supposed to do, and would follow someone around, pretending to help.  In dungeons, I stood back and picked up the goodies dropped while someone killed all the monsters in the dungeon in one hit.

If it sounds boring, that's because it is.

So, now, two expansions and four years later, he's convinced me to play again.  But I've set some guidelines:

1. I only play on PvE servers.  No more jerks can make me cry.  The game might kill me, but it's not setting out to be a jerk, so I can forgive it.

2. No more running through dungeons or zones.  I follow the story and read every quest I'm given.

3. I can drop the subscription any time I want and pick it up later.

Have I mentioned that I have a bit of gaming ADD?

But, no matter how I'm doing it, I'm actually having fun and enjoying myself.  Which is the whole point of the exercise anyway.

Even if it means babysitting lots of little raptors. 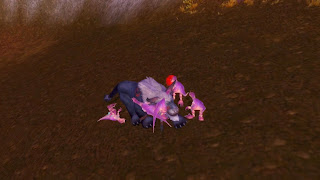 Posted by Witless Exposition at 12:36 PM

Email ThisBlogThis!Share to TwitterShare to FacebookShare to Pinterest
Labels: taurens and blood elves and trolls oh my, Warcraft, WoW, yup I'm a nerd

Ohh WoW how I miss thee. I have a lvl 64 human shadow priest on Stormrage (PvE)but I've had to pause playing because I'm tired of playing alone. I originally got the game for a b/f, who is NOT my hubby. And my hubby could care less.

That sucks! We tried PvP when we first started, but I hated it and put my foot down.

How you liking PvE so far?

(And I bounce around classes like crazy, too. Just gotta have some variety!)

OMA, if you wait five years, I just might catch up with you and be able to play with you!

Simple, I'm glad I'm not the only one that hated being on a PvP server. I'm really enjoying the PvE; I still get nervous when I see an Ally running past.

I've never played WoW but I watched my cousin play once and it seemed far too dificult for me! Not to mention, I already waste all my time blogging so I don't have any to spare!