Review: American on Purpose: The Improbable Adventures of an Unlikely Patriot 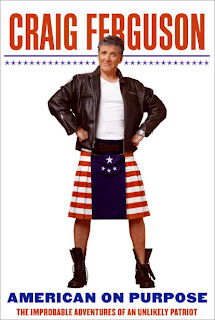 If you've never heard of Craig Ferguson before, you need to go on YouTube and watch one of his late night monologues.  It doesn't matter which one.  Just go and then come back and check out my review.

I fell in love with Craig Ferguson when he was on Drew Carey and then even more so when he started doing the Late, Late Show (which sadly I mostly catch on youtube now). I was lucky enough to catch his stand up show in Austin and the husband and I will still randomly quote lines to each other. But after reading his memoir, it solidified my love for him and earned him a spot on The List.

(If you don't know what I mean, ask one of your married couples.  They might have a different name for it, but I'm sure they have some version.)

Plot in One Sentence: Ok, so this really isn't a plot since it's non-fiction, but you know what I mean.  The book chronicles Craig's life and fascination with America as well as his battle with drugs and alcohol.

What I liked about it:
Craig's trademark humor is rampant through the memoir, absurdity mixed with genuine sentiment that never becomes too sticky-sweet.  He's not ashamed to open up about the mistakes he's made, and while the killer ducks that he describes during a bad LSD trip are hilarious (to us outside of the trip) he uses all of his stories to a greater purpose.

The memoir also opened the doors to seeing some of his movies (I highly recommend The Big Tease) and I've begun reading his fiction work Between the Bridge and the River (which has strong echoes of autobiography so far).

I loved hearing the stories about growing up in Scotland and his family life, sometimes surprised by the links in behavior across the boundaries of space and time (Work=Love in my upbringing, too).

One of the major themes about the book is explaining how Craig came to apply for US Citizenship.  In his funny, quirky way he has managed to do what no politician has done for me, ever: made me see the promise we have as a country.

What I didn't like about it:
Craig is a bit of a name-dropper in the book, but not with famous people.   Instead it's people that made a difference in his life, but I felt the need to have a cheat sheet with all the names as they tend to pop in and out of his life.  If you're better with names than I am you might fare better than I did.

Overall:
You'll enjoy the book if you're a fan of Craig Ferguson, are moved by stories of overcoming addiction, or enjoy tales about killer ducks, gay hairdressers, and winning despite Hollywood being stacked against you.


And as a bonus, for all of my fellow Doctor Who fans, Craig's a fan as you can see by his musical number for when Matt Smith stopped by the show:

Posted by Witless Exposition at 2:30 PM

I've been a big fan for a while now, too. Loved the Big Tease and Drew, but it was the movie Saving Grace that he really won me over in. And his standup is hi-effing-larious!!!

Thanks for sharing Craig with the rest of us. ;)

Oh man...that still gets me.