The Passage vs. The Strain 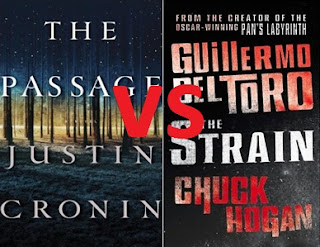 I have to say that after being inundated with friendly vampires the last couple of years (which I do have a soft spot for myself), I was excited when I heard about The Passage and The Strain.  Both were getting good buzz and were modern takes on vampires that promised to include no sparkles or deep emotions of love from the vampires.

After getting around to reading both of them, I realized that it's basically trying to compare apples to a Volkswagen.  They really are two different beasts.  But to the best of my ability, here's the breakdown of the two books:

Warning: I'm trying to avoid spoilers as much as possible, but small details may be given away.  But don't worry, nothing big.

I can tell that The Passage was Cronin's first attempt at a horror/sci fi genre novel.  Although the first 200 or so pages were AMAZING (really, I can't emphasize that enough), it all went downhill from there.  I could really see his influences bleeding through (which isn't a good thing), and that distracted me at several points.  He had a huge cast and really tried to make us care about the colonists, but I just really only cared for about three of them.  The action pieces were good, but in this genre of writing, you really need more than one per 200 pages or so. (Did I mention the book is 784 pages?)

The Strain is a more straight forward horror novel.  While I could tell it was inspired directly by Dracula, it was basically only head-nods to the work, and took it's own unique spin.  I cared about all the characters, and several times was really touched by side character's situations (and often bloody deaths).  I could tell that DelToro had his hand in the description of the vampires.  They really could have been something out of a darker (if that's possible) and scarier (as opposed to just traumatizing) Pan's Labyrinth.

Without a shadow of a doubt, for me, The Strain won.  It was scarier, more touching, and interesting.  It took me several months to read The Passage, simply because I hated the middle section.  I had to force myself to get through that.

I already have The Fall, the second Strain book, on my Nook and can't wait to start.  I'm not sure I'll even pick up the second book in the Passage trilogy when it comes out next year.

I'm sure I'll have lots of people disagree with me, and I welcome that.  The Passage has gotten a lot of good reviews.  I just felt he needed a much stronger editor to help him pare down some of the fluff in the book.
Posted by Witless Exposition at 1:59 PM

I love how you did this breakdown of the two books. I got a lot out of your review and I looks like I'm going for The Strain...after I get a night light. =)

Awesome way to give us the details. I'm sold on both.

Great breakdown. It really gave me an excellent feel for each book. I'll give both a try.

W.E.: Thanks for the comparison between the two. I had seen "Passage" at the local bookstore and while the premise intrigued me, it didn't $26.95 intrigue me. Think I'll wait on it awhile. I love the whole epidemic/'The Stand' (giving away my age) thing, but I'm really getting tired of vampires.
Two years ago I heard editors crying "no more vampres" but then True Blood hit, (and yes, I'm addicted like everyone else...but really? I'm starting to get tired of bloodsucking. Give me a normal zombie. Or better yet, wipe out 90% of the population and let's just have a proliferation of carrion feeding pigeons or something. Sorry. I'll shut up now...:)

I haven't read "The Strain," but I did read "The Passage." I adore del Toro, but something about watching a director produce a novel turned me off reading. I might like to read it, based on your recommendation.

I did like "The Passage." All in all, it's cool that people are trying to make vampires cool (i.e., non-sparkly) again. But like you, I felt that there were many, many signs that this book was written by someone not well versed in the genre. The cynical part of me wondered if "The Passage" wasn't just a cynical attempt to make some $$ by someone whose first love is literary fiction.

There are some great sequences in "The Passage," though. And (SPOILER ALERT! SPOILER ALERT!) I do think it's a ballsy move to kill off 99% of your MCs a third of the way into your book.