First off:
Thanks to everybody for helping me hit the 150 views mark!  (Even if you're a bot)

Now for our Monday Randomness:

In a week, I came across two referenced to the Empire and Storm Troopers.  I took this as a sign from the Geek Gods to include it in today's post.

Here's a great series of pictures on what Storm Troopers do on their day off.  Some great optical illusions created with some of the most bendable and posable action figures I've ever seen!  Don't forget to check out part 1, too. 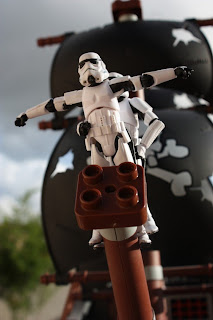 On a steamier note, Philip DeFranco (great vlogger on Youtube) mentioned these in a post I just got around to watching.  Artist Feng Zhu has created a series of pin-up/recruit posters for the Empire.  Gotta say, they're pretty effective.  I can imagine lots of guys waiting in line to sign the dotted line.  Check out the series here for easy viewing (depending on your workplace, may be NSFW) 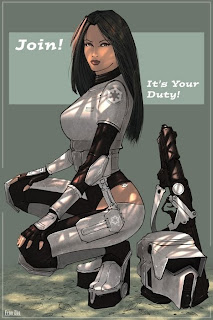 Thanks to Pandora again for introducing me to some music.  This one is an older song, but a version I've never hear before.  The Great Etta James singing "Don't Get Around Much Anymore." Now, if you've heard other versions, it's actually a pretty sad song (although it has a faster tempo).  The person singing is closeting themselves away because of heartbreak.  This version, though...I can't help but think she's mocking the guy.  "You thought I would go into hiding, but here I am belting this song out!"  Just another reason I love this lady.  (Read about another great reason here)

I've noticed that this post is going from guy friendly to guy phobic.  That's right, the next randomness is about *gasp* tampons!

That's right.  I ran across this article about the new advertising campaign for U tampons, etc line by Kotex.  Yeah, I'm a month late (ha, ha, period pun), but I immediately had to hunt down the commercials.  This one is my favorite (if you search on Youtube, you'll find a lot more.  I'm not a huge fan of the beaver ones. Check one out here).


Finally honesty!  Although they apparently aren't allowed to say "vagina" or even "down there" in American commercials. *shakes head*

Hope all this makes your Monday a little more bearable, and sorry, guys!  Hope it didn't freak you out too much.
Posted by Witless Exposition at 3:04 PM

Ahhhh! A friend made me aware of the Storm Trooper photos, and I gotta say, I got QUITE the laugh out of them :)

They are pretty great. It's pretty crazy all the things they came up with.