Now you can't say I didn't warn you.  Two different warnings before I'm even on to the post proper.

I guess I should preface my rant a little and explain that I'm a feminist. Not the mangled idea that people have of feminism.  I love men (especially my husband), want a family, have an odd fascination with Bettie Page, and actually enjoy cooking (check out some of my recipes on my other blog if you'd like proof). But I feel very strongly about women's legal rights, both here and in the rest of the world.  I'm not quite as active as I'd like to be, but in little ways, I'm trying to change that.  I guess the rant to day is part of that.

I guess the current background on my pc would go a long way to explain my brand of feminism. 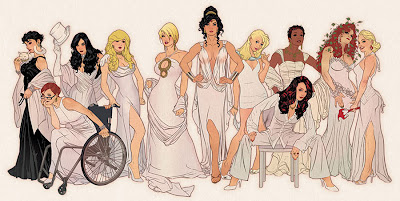 The title of the picture is the "Real Power of the Universe." It's a collection of the women from DC comics.  It's definitely a little exploitative and aimed at men, but I think it's also a bit of a mockery of the T & A that's in comics so much.  Even though the characters are sexy, you can still tell they could kick any guy's ass that gets in their way.

This also directly leads to part one of my rant: Megan Fox. 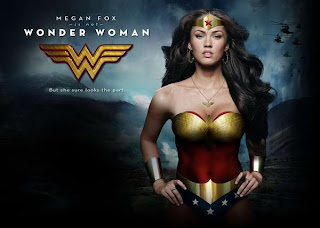 I was fooled by this fan-made poster for the rumored upcoming WW movie.  Some have said it clearly looks fake, but it's better than some movie posters I've seen.

Now, let me make it clear that the main reason I don't like Ms. Fox is because of the hype she's built around her.  But, I digress.  The reason for my rant today is the following quote about the fact that she's not playing WW.

"Wonder Woman is a lame superhero. She flies around in her invisible jet and her weapon is a lasso that makes you tell the truth. I just don't get it. Somebody has a big challenge on their hands whoever takes that role but I don't want to do it."  From a Times Online interview.

Really?  This from a woman that currently plays a literal piece of whore eye-candy in Jonah Hex?

Clearly she doesn't know anything about the character.  I'll try to keep my nerd/fangirl in check.  But consider the following facts:

The good news is that we'll only have to deal with Ms. Fox for a few more years.  She's a terrible actress, and at 24, she's getting to be old news in Hollywood.

Because of their huge revenues, beer companies can afford to spend metric tons of money on ads.  Let's go ahead and admit it, they're usually the best ads on Superbowl Sunday, too.  I found these two ads, though that really ticked me off.

I think what's so insidious about this commercial is that it's actually kind of funny.  Until you think about it.  All the commercial does is stereotype, marginalize, and belittle women.  We're apparently such harridans, too, that we can't let our men have a good time without us.

This is such a disgusting ad, I can't imagine that anyone thought it would be a good idea.  And I'm really ticked at Guinness.  Usually they have good ad campaigns.

If I try to talk about this one, my head might actually explode.

So, I leave you with this thought:

Don't get sucked into hype or thinking "it's just a commercial."  All of these little pieces make up a whole that does little to promote women and does much to hurt us.
Posted by Witless Exposition at 10:30 AM

Email ThisBlogThis!Share to TwitterShare to FacebookShare to Pinterest
Labels: beer, feminism, Megan Fox is stupid, There will be blood, Wonder Woman