Changeless by Gail Carriger (and some self congratulation)

Before I begin the review of the second Parasol Protectorate book: 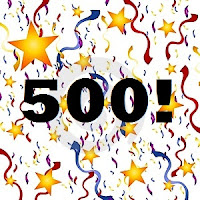 I've recently passed 500 visitors.  Yeah, me!  Thank you all for visiting the blog and I hope you keep coming back.

Now that that's over with, the book review. If you haven't read my review of the first book, make sure you check it out.

I tried to make the book last, breaking up my reading with Guild Wars and Netflix queues, but I still finished this in about two days.  Even though it's almost 400 pages, it's a fast read that for me, was much easier to dive into than the first. 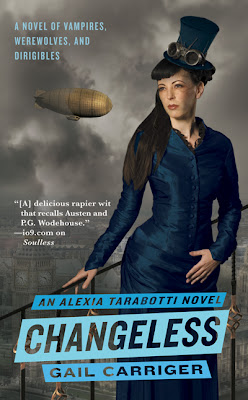 Plot 8/10
The novel begins with a picture of slightly, um, graphic description of the life of Lord and Lady Maccon (no real spoiler there, you know it's going to happen in the first chapter of the first book).  However, their honeymoon bliss is interrupted by a strange event in the heart of London.

Lord Macon jumps into action and Alexia is left to get to the bottom of the mystery on her own.  She is aided by a new, mysterious, and *gasp* French ally enemy unknown, Madame Lefoux.

The plot moves very quickly and seamlessly through scene changes and feels much more compact than the first one.

The foreshadowing was a bit heavy handed in places, but based on some of the Amazon reviews, some people didn't catch it.  The novel does end on a rather harsh cliffhanger that caught some off guard.  Maybe I'm just used to it from the other series I've read, but I felt that it fit, and it definitely sets up the foundation for a great third book (Due out Sept. 1)

Characters 7/10
I feel that Carriger is really starting to get the hang of her characters in this novel, and it really makes me excited to see where she goes with them.  My only complaint about Alexia this time is the signals that she misses.  I can't really talk about what she misunderstands, but I will say this: it seems in keeping with Victorial morals, but not with Alexia's character.  I feel she's smart enough and out of the norm enough to have caught on faster than she did (the very end of the novel)

I also really enjoyed the slight changes in emphasis on Lord Akeldama.  While he is still the crazy, silly, stereotypical fop, more emphasis was placed on the fact that it is mostly an act to make him seem less of a threat.  If you've seen/read The Scarlet Pimpernel, you have the basic idea.

The one character that really got on my nerves this time was Ivy Hisselpenny, Alexia's "best" friend.  I have to be honest, I don't really see any signs of real friendship in the relationship.  Ivy seems so flighty as to border on being a hummingbird, and Alexia simply makes fun of her throughout the novel.  After a few scenes with Ivy, I was ready for her to be pushed off the dirigible, but no such luck.


Writing Style 7/10
Great improvements in this section!  We didn't have to deal with the head jumping of the first, which was a great relief. The dialogue also seemed more in tune with the setting.  The only line that really took me out of it was Alexia saying "Ha-ha, very funny." At least replace it with humorous.

Speaking of humor, the humor that's such a big part of the first is here as well, and more refined to me.  A lot of it was still between Conall and Alexia, who's marriage hasn't curbed Alexia's temper. (Thankfully)


Overall: Thumbs Up
I really enjoyed this one, more so than the first.  I can tell Carriger is getting more comfortable with the setting and characters. I'm actually really looking forward to September and the third book!
Posted by Witless Exposition at 11:47 AM

Great review! I've been meaning to pick up this series. :)

I'd really recommend them. And as much as I think the second one improved, I think the third will be great.