Review of Soulless by Gail Carriger

My first official book review and my first official steampunk/urban fantasy/romance novel.  That's a lot of slashes, folks. I do have to admit that the cover was what grabbed me.  I love British history and lit, so much so that I have a very hard time narrowing down a favorite time period for the literature. I've also been wanting to get into steampunk for a bit, but haven't really checked out much of it.  So, on a whim, I picked up Soulless to pass the time at the airport for my return trip home (I expected it to be as long as before, but luckily wasn't) 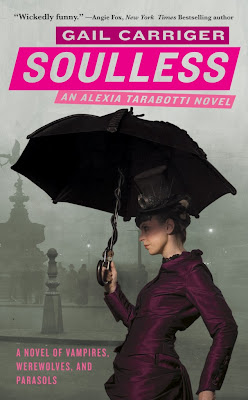 Plot: 7/10
Soulless is a hard book to pin down genre wise.  It has splashes of a lot of different genres, but doesn't easily settle into any one niche.

Alexia Tarabotti is a half-Italian 25 yr old spinster in an alt. reality Victorian England.  In this version of history, vampires, werewolves, and ghosts (oh, my!) have been integrated into English society since the Renaissance.  They are responsible for the rise in power of the Empire and many of the societal norms (cloakrooms came into popularity because werewolves were in need of extra cloths after shifting into their wolf-form).

Alexia has been part of the supernatural world since birth, because she lacks a soul.  This hasn't turned her into a deviant, in fact, she has strived to accept and uphold traditional morals (except when it interferes with her appetite).   Her unique state allows her to temporarily turn any supernatural creature back to a human state.

One night, as she's hiding out in the library at a boring ball, she is attacked by a lisping, rude, and untrained vampire.  Using her trusty parasol, she is able to kill the vampire.  However, this quickly gains her the unwanted attention from the local vampire hive and the Bureau of Unnatural Registry.  Well, most of the attention is unwanted, except from the direction of Conall Maccon, a high, and werewolf, official in BUR.

Soon everyone is trying to find out what Alexia knows about the situation, and she finds herself drawn into a battle that stands in the way of her ultimate happiness.

While the details of the plot are interesting and unique, if you've read much at all and pay attention to foreshadowing, there'll be no surprises for you. Satisfying, but nothing new.

Characters: 6/10
To me, a novel is only as strong as its characters.  Sadly, this is one of the downfalls of the novel.  Alexia is uneven at best, and annoying at worst.  The first chapter in the novel gives us the equivalent of a Victorian Buffy, but then in later chapters she seems to forget life-saving advice and refuses to see her worth. By about halfway through, the character seems to stabilize and becomes more real.

Lord Akeldama is Alexia's foppish vampire friend.  Every time he came on the scene, I cringed a little.  I know from reading other novels written about and during the time that dandies did really act like the stereotype of a gay man, but he was a little over the top for me.  However, based on some hints, you can tell that the mannerisms are hiding a depth that isn't fully seen in this novel.  I hope to see more of the "real" Akeldama in later novels.

Conall Maccon is the love interest.  He's Scottish, a werewolf, and sexy.  Yeah. Can't see anything wrong with that.


Writing style: 5/10
My main issue with the novel overall is the writing style.   The unevenness of Alexia is amplified in the writing style.  It's written in third person omniscient, which is an extremely hard pov to master.  Carriger doesn't quite know how to handle it.  There is a lot of distracting "brain hopping" in early scenes of the novel.  By the end of the novel, she seemed to have a better grasp, however, it may be that I just got used to it.

There's a lot of anachronisms in the book that can be distracting.  One of them that really stuck in my mind was Maccon saying "Gee, do you think so?" (Or something to that affect)

The first physical scene with Maccon and Alexia had the same feel to me.  Alexia seems a bit too wrapped up in propriety to allow things to go the way they do.

Overall: Thumbs up
I know, I know, I mixed my reviewing systems.  But I have a hard time placing an overall grade on books.  I like to go by the pass/fail method.


While there were things that bugged me about the book, I think overall it was a lot of fun. I loved the premise and found all of the alternative history details fascinating.  I want to find out more about these characters and how it goes for them. I hope that (as with a lot of other series I've read) each book will get better.

And as the book is only found in paperback, it's definitely worth your 7.99.
Posted by Witless Exposition at 4:58 PM

Completely agree with you on the Maccon front. ;) But most of all, it just made me laugh a whole lot, which I love in a book!

Ugh! I can't believe I left out the humor. That was one of my favorite parts about the book, too. You can tell Carriger had fun writing it.