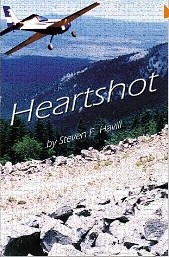 Heartshot is the first one of my 101 in 1001 random book choices. I probably never would have picked up this author if it wasn't by chance.  It's put out by a small press, so it might be a bit hard for you to find it, but it's fairly cheap on Amazon.

Plot 7/10
Bill Gastner is an older Undersheriff in his Posadas County, New Mexico.  He's good at his job, if a bit of a loner.  On the Forth of July, a carload of teenagers dies in a traffic accident running from the cops.  While clearing the wreckage, they find a kilo of cocaine, and it becomes clear that Bill's small town is in danger of getting big city problems.

This book had the feel of a first time mystery novelist, and I was able to work out who was responsible the second time they came on the scene.  The "twists" weren't very surprising, and I had the majority of things worked out long before they happened.  It was still an interesting plot, and I enjoyed watching Bill figure out the mystery.

One thing that I really didn't care for was the killing off of a secondary character (I won't give it away).  The death doesn't really make sense, and isn't given a satisfying explanation.  Also, I think it threw away what could have been a really interesting character in a book filled with so-so placeholders.

Characters 6/10
Bill is drawn very well.  He's funny, down to earth, and smart.  If you've read the "Cat Who" books by Lillian Jackson Braun, think of Jim, but darker.  I really liked getting to know the character, and I think Havill made a good choice of using Bill as the narrator as opposed to some of the other characters.

That being said, the other characters are pretty lack-luster.  We meet Sheriff Holman, an elected politician.  At first we're supposed to distrust him, then be proud of his supportiveness, but I never really got a clear sense of his character or motives.  We're told he really loves press and he's a politician, but he seems to hand Bill the reigns and glory of the case with little reluctance.

Bill's right hand woman is the lovely Estelle Reyes.  Literally all I know about her is that she's pretty and supposedly a good detective.  Maybe Havill fleshes her out in further novels?  At one point she tells Holman that she's Bill's gopher (in an attempt to draw out the killer), and Bill is upset with downplaying her abilities.  But to me, that seemed a pretty accurate portrayal.

Overall, Bill (and the characters that are killed off) were the only ones that interested me or that I connected to.

Writing Style 8/10
The book is a slim 209 pages, but it felt like a lot longer.  The style was a solid, non-descript mystery style (here's this guy, here's this clue, here's where the villain explains the plot), but that's not necessarily bad.  Havill used the conventions in the genre well, but without any exciting flare.

Bill does have his funny moments, but not enough to lighten the mood of a book with such a high body count (nine by the end).

Overall: A Hesitant Thumbs-Up
It was a good book, but it took me twice as long  to read than The Secret History of the Pink Carnation which is 449 pages.  If you like curmudgeon-y old men who smoke a lot and solve crimes, and you like a western-small town feel, you'll enjoy it.

Update:
I was planning on reading Kid B for my random YA pick, but I've decided to put it down.  After reading the following sentences:


I decided I was too old, too white, and too suburban to enjoy this book.
Posted by Witless Exposition at 10:18 AM

Thanks so much for featuring my blog and a blurb about me! I feel so honored! :)