Review of The Secret History of the Pink Carnation 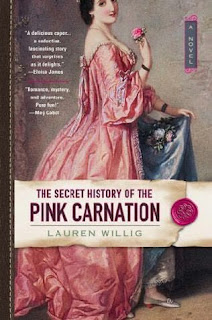 The Secret History of the Pink Carnation was recommended to me by my friend Jamie after I gave my review for Soulless.  It's a quick, fun read, and I'm already waiting for the second one from the library (excited, it's in transit)!

Plot 9/10
Eloise is a historian doing research in England for her dissertation.  She's focusing on three of the most famous English spies during the French Revolution and Napoleonic Wars: the Scarlet Pimpernel (real in the book's universe), the Purple Gentian, and the Pink Carnation.  No one has ever found out the identify of the P.C., but Eloise has a lead that could prove the clue to the mystery.

We also discover the story of the Purple Gentian in more detail through his alter ego Lord Richard Selwick and a young English girl Amy Balcourt.  Amy travels to France to live with her brother during a brief moment of peace between the English and the French.  It's been her life long desire to join the ranks of the Purple Gentian and help him avenge all the deaths during the revolution and depose Napoleon.  It's only once she gets to France that she starts to realize that perhaps the Purple Gentian could be more than a hero to her, he could be the love of her life.

The plot moves quickly and sweeps you along.  There's not a lot of exposition or background on the historic period, so if you're unfamiliar with Napoleon's reign in France, you might be a bit lost.  I felt that the modern sections were the weakest.  In all honesty, I wanted to skip those and go back to Amy and Richard's story.  There are some slight twists toward the end, but they come as no real surprise. Overall a pretty basic mistaken identity, defeat the bad-guy type of love story, but very enjoyable.

There were a couple of slight plot holes that I wish had been fleshed out more, but nothing major.

Characters 9/10
I really enjoyed the characterization of  the characters.  I loved Miss Gwen most, I think.  She's the chaperon Amy takes with her to France.  She's a tough bird that always surprises the reader and the characters with what she does next.

I didn't really care for Eloise.  She seemed a bit like a Mary Jane meets Bridgette Jones character.  But she wasn't in the boor for very long, so I could see how it would be hard to make her three dimensional. I also found her a bit dense, she was completely shocked by the twist at the end, even though it was pretty clearly foreshadowed.

Amy actually got on my nerves sometimes, but not because of the tunnel vision she had about her mission and the Purple Gentian.  She giggles and bounces.  A lot.  A whole lot.  To me that made her more of a little girl, and less of a woman to take seriously.  By the end she redeems herself, but she's still bouncing and giggling.


Writing Style 9/10
The writing style was very good.  I felt that Willig captured the feel of the time period, but also was able to make the characters better fit our modern sensibilities.  Too many times historical fiction just seems to plop modern characters in costume and never really makes them merge.

There's lots of humor and silliness, but it all makes sense in the context.  I don't think I would have liked it as much without the lighter touches.

The jumps back and forth between the time periods are easy to follow.  The modern is in first and the past is in third (we learn that Eloise is piecing the story together from letters and journals from all of the characters).


Overall: Thumbs Up
I really enjoyed this.  It went by really quickly, just two days.  I could have easily made it one, but life got in the way.  I was really excited to see that there are several more already out in the series.  It seems that this is how it always goes with me, I'm always late on the bandwagon. But that does mean that I don't have to wait for the next book to come out!
Posted by Witless Exposition at 10:49 AM

The next one is better. In fact, they get better with each one. I'm glad you like my recomendation.

I'm really looking forward to the next one!