My writing has a personality disorder

After stumbling upon a random tweet, I found I Write Like. . . It's a pretty cool concept.  You paste something you've written in a box and it analyzes it to tell you a famous author that you write like.  I'm not sure how accurate it is.

I was curious, so scene by scene, I analyzed my 50k in 50 Days WIP.  Here's the breakdown of authors that I write like:
Overall I was pleased.  I'm not sure what this says about my writing style.  It sounds like it's all over the place, which has me a little nervous.  But this is the first draft, so I can unify, etc on the second go-around. 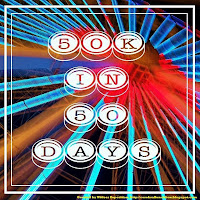 Well, I'm three days in to the 50k in 50 Days challenge.  I'm really enjoying it so far and like to see my story grow each day.  Here's the first update.

What I've learned about the process:
It doesn't take me as long as I feared to write 1,000 words. It's also very hard to not go back and fix the previous day's writing.

What I've learned about myself:
So far, I'm pretty sure I've written three or four things that would send me straight to Hell if I was Catholic. As I'm not, there's probably only two things.  I've also realized if this ever gets published, I'll have to use a pen name and won't be able to tell all of my family about it.

(PS--Feel free to use the button for the challenge.  That's how I killed some of the writer's block today.  I think it turned out pretty good for my first try)
Posted by Witless Exposition at 11:56 AM

Oooooh I am SOOOO using that analyzer!

So... I totally just got Stephen King. How epic and awesome is that?

Yeah, I put a couple of chapters in and was told I write like Stephanie Meyer. I'd love to have her money and I did like her books (Insert all the jokes you want here, but I bought them for my classroom library and read them in 2003 (WAY before they were popular) and she does use good vocabulary.) Maybe I'll throw in a few more sections and see what shakes out.

Great site! According to it I write mostly like James Joyce, David Foster Wallace, HP Lovecraft, Dan Brown and Kurt Vonnegut. I guess I can't make up my mind. lol

Oooh I also got David Foster Wallace and Dan Brown. Stephen King is totally my bragging one though. :D

That link was really cool. Although I had never even heard of the authors it gave me. And they were all guys...lol. I hardly ever even read male writers maybe that's why I hadn't heard of them. thanks for posting and I'm so taking that button!

I'm so glad you all liked the link. It get's pretty addictive, so watch out (but seeing that you have multiple authors listed already makes me worry).