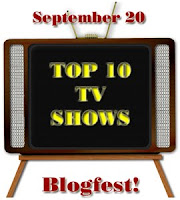 Do me a favor and stop by Alex's blog and check out all the other cool participants in the blogfest.  Alex is pretty cool himself, a sci-fi writer that has some great tips on blogging and creative writing.  Look forward to great stuff from him!

Now, without any more procrastination here's my list.  It's not really in any particular order, just ten shows that I really enjoy at just about any time. 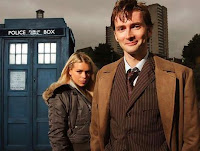 Doctor Who
A recent acquisition in my TV habits, I've very quickly become obsessed with everything the Doctor.  I've powered through the first three seasons of the re-launch and have several hours of the classic episodes in my Netflix queue.  I like it for a lot of the reasons I really love Star Trek, Quantum Leap, and other sci-fi shows (Firefly, Stargate, etc).  Fun (if cheesy) effects, likable characters, a healthy sense of humor, and a touch of the darker side.  The accents don't hurt either!

House
The more I make this list, the more I realize I really am an Anglophile.  Two words can explain why I love this series: Hugh Laurie.  An amazing actor with great comedic timing, and an ability to channel the pain and torment from the other Doctor in my life.  (Just watched the premier tonight, btw, and it was good.  I think I had built it up a bit too much in my mind over the summer, but I'm really looking forward to what this season has to hod.)

It's Always Sunny in Philadelphia
This is one of those shows like Catcher in the Rye, you either love it or you hate it.  Full of crazy situations and degenerate characters without any redeeming characteristics, it's hard to pin-point what it is that makes me love this show.  Not for the faint of heart, hey-o!

Jekyll
I'm not sure I should really count this one, as it's more of a mini-series than a regular TV show.  If you have Netflix, I order you to check it out!  A great modern twist on the Jekyll and Hyde story that traces Jekyll's descendant.  Hyde's quirkiness is over the top and a bit hard to swallow at the beginning, by the end it's got you hooked.  Full of great acting, but a couple of really atrocious fake American accents.  You'll never be able to hear someone whistle "Pop goes the weasel" without being creeped out. 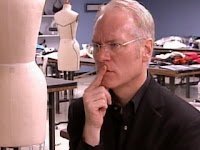 Project Runway
My only really girly choice of TV shows.  I've watched it religiously for several seasons (all the way back to Santino!)  I'm still not 100% behind what Lifetime has done to it, but it's still the show that makes me love Tim Gunn more every week.

Intermission
Wow!  This is really a lot harder than I thought it would be!  It seems like I spend so much time in front of the TV, but it's like anytime you're put on the spot.  Performance anxiety, I suppose. 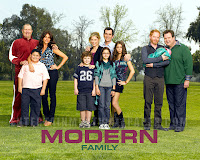 Modern Family
A new show that had me hooked after the first episode I watched.  The only reason I'm even remotely contemplating Hulu Plus.  A hilarious show that's filled with great, likable characters.  I suppose it's the happy palate cleansing alternative to Sunny.

Smallville
The show I hate to love and love to hate.  What can I say?  I hate Lana and Clark most of the time, but Lois, Oliver, and Chloe make up for it 110%.  I swear, if he doesn't fly in this last season, I might actually be forced to kill someone!  The picture I chose is probably my favorite scene of the whole show so far, the birth of the Justice League.  I keep wishing and hoping they'd find a way to work Wonder Woman in somehow, but I know it's too much to dream for. 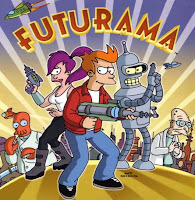 Futurama
Good news everybody! I've only recently started watching this one too.  My husband's been trying to get me to watch it for years now, but I thought I would enjoy it as much as I did Billy Madison, so I found ways out of it.  Turns out, he was right!  Even though I have a soft spot for the Simpsons, I have to say, I enjoy Futurama much more. Arrested Development
This is one of those shows that I've watched so often I can put it on while doing housework, but can still sit down and notice brand new punch-lines.  The beginning of Michael Cera's clueless shtick, a banner of what TV comedies could be, and perenial favorite of Hipsters everywhere (or is that just white people?) 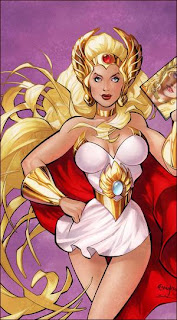 She-Ra
Along with an early introduction to Red Sonja and Sheena, probably the reason I'm a staunch feminist with a really screwed up self-image.  Also probably a reason that when I played with my Barbies, Ken was always being kidnapped and being rescued.  Re-watching it now (on my complete DVD set, btw), the years haven't necessarily been kind to it, but it's still a lot of fun.

While this whole list was a bit harder than I thought it would be, it was a lot of fun, too.  Makes me want to pop in a DVD, rearrange my Netflix queue and settle down for a long week of pjs and popcorn.
Posted by Witless Exposition at 10:13 PM

What a great list! I just mentioned cartoons on another blog (Thunder Cats, etc). I love the ones on when I was growing up. Hugh Laurie is amazing. For the longest time I didn't know he was British. He does our accent so darn well! Project Runway was one of the shows that got me interested in reality tv (along with the cooking ones like Hell's Kitchen). So fun to watch the drama of it!

lol, I remember She-Ra and I love Futurama. Great selection :)
Lyn
W.I.P. It: A Writer's Journey

House is the man you love to hate. Wild that Futurama is finally back on, too. Thanks for participating in my blogfest!

Nice list. Haven't seen "Jekyll" yet, but putting it in my Netflix queue now!

House, modern family, futurama, and arrested development = awesome!!
The rest i have not seen or only seen an episode or too :)

House is something else and I love Modern Family~
Fun list!

She-Ra, I had forgotten all about her! She was part of my Saturday morning line up as a kid.

I love Arrested Development! And I'm only half-white, haha.

She-Ra rules. I have many happy childhood memories watching She-Ra, but I haven't ever gone back to rewatch it.

I followed Smallville for the first couple seasons, but then fell out of it. I have seen a couple random episodes from recent seasons, though. That shot of the Justice League is HOT!