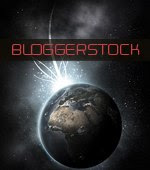 End of the month, that time again: Bloggerstock!  Today I'm hosting Kelly, which I guess is fair since she hosted me last month (and they say these things are random.)  This month's topic was a pretty difficult one for everyone involved, but Kelly did a great job.  I'll shut up now and let her tell it!


~~~~
Hi there!  I'm Kelly from over at Not The Only Dreamer, and I'm gonna steal the spot light over here today for Bloggerstock!  If you don't know about Bloggerstock yet, you should sign up for next month, it's tons of fun.

The topic for this month is ghost stories, and I have a doozie.  Well, looking back on it, it actually doesnt seem like that big a deal, but I certainly remember the jolt/shiver/electric pulse that ran through my body so fast I screamed and woke up a baby.  But, I digress...

I was pretty young, it was while I was in middle school, and I was invited to stay the night at a friend's house.  This particular house that she lived in, I had actually been there many times before even though her family had just moved in.  The family that lived there before hers were close with my family, so I had been in and out of this house for years already.  I had remembered over hearing the mother of the previous family saying something under her breath one day about how she thought the house was haunted, but when I asked about it, they would quickly change the subject, probably thinking that I was too young to understand or maybe they just didn't want to scare me.  But this was a few years later, when I was invited by this new friend for a sleepover.  Her family had been living there for just a few months, but that night my friend started telling me about how she and her family had seen some weird things happen in the house, and that she thought the house was haunted.  I then told her about how I had heard that before...

She had a baby sister, who was younger than two years, and she told me that her family had heard a woman singing in the baby's room when the baby would take naps.  Her mom had also gone into the kitchen after only being out of the kitchen for less than a minute, to find all of the cabinets open (I think that also happened in a movie of some kind, so maybe that was her blowin smoke up my booty... but still... just wait).  She also told me that while watching tv at night, they had seen shadows on the wall in the light from the tv.

Anyway, late that night, my friend and I sat down in the den to watch a movie, and we popped some popcorn and turned the lights out.  About halfway through the movie, she told me that she had seen a shadow, and I had missed it, but she told me to just keep watching the wall, so I did.  A few minutes later, I saw a BIG shadow in the shape of a man's head and shoulders, and it blasted on the wall for a couple seconds.  As soon as I saw this shadow, that's when I felt the jolt run through me...  like nothing I have ever felt before.  We then decided that we wanted to see where he might be standing in the room to make a shadow that big on the wall opposite the tv, so my friend got up from the couch, and stood in front of the tv light until her shadow was about the same size on the wall as we had seen his appear.  Turns out he had to be standing RIGHT in front of our couch to make it appear like that...

Can you guess how much sleep I got that night??

Be sure to come and visit my blog to see who wrote on my blog, and maybe she'll have a good ghost story too :)


~~~~
Check out my ghost story at alfred lives here and keep the scary campfire stories going!
Posted by Witless Exposition at 10:10 AM

Love a good ghost story! (As long as it happens to somebody else)

Just popped in to say I've posted your blogfest banner on my blogfest page.

Thing is, you've no plain old "comments" section on the blogfest post! ;)

Thanks for the marvelous posting! I truly enjoyed reading it, you are a great author.I will make sure to bookmark your blog and will come back very soon. I want to encourage you to definitely continue your great writing, have a nice weekend!

Thanks for a marvelous posting! I seriously enjoyed reading it, you could be a great author.I will always bookmark your blog and will come back later in life. I want to encourage you to ultimately continue your great job, have a nice weekend!