Geekiness ahead: Why I love The Doctor

Thanks to Netflix, I've recently become better acquainted with Doctor Who.  I've powered through the four seasons and specials of the relaunched series.  While I'm waiting for the latest season to be released on DVD, I'm exploring spin offs and older episodes from the original series.


If you're unfamiliar with Doctor Who, I'll try and give you the core facts that you'll need.  The Doctor is an alien, a species known as Time Lords, that have the ability to travel time and space.  The Doctor's ship is known as the Tardis and it looks like a blue police box from the 1950s.  He usually travels with at least one companion, exploring and helping save various planets and species.  When he's mortally wounded he has the ability to regenerate into a completely new body (which is how the BBC has been able to have 11 actors play the same character).
My husband doesn't quite get my fascination, although he doesn't dislike the show (he says he can "take it or leave it" which is basically my feel about when he wants to watch Stargate).

So I thought I'd share my love of The Doctor with you, oh great internet hoards, in the hopes that someone out there also shares my love.

Reasons I love Doctor Who:

1. It's cheesy, but in the good way. I mean who can resist a pill that animates people's fat so it walks away, a woman who's had so many face lifts that she's just a piece of stretched skin now, or a plastic mannequin hand that tries to strangle people?
2. The main characters are really wonderfully written. Even Martha, the companion I didn't really care for, or Mickey the spineless wonder were still more than just stereotypes.
3. David Tennant and Billie Piper. The perfect example of #2.  I love they're chemistry together.  The end of season two broke my heart, but the end of season 4 made it better.  While I love Christopher Eccleston's performance, David Tennant is most assuredly "My Doctor." 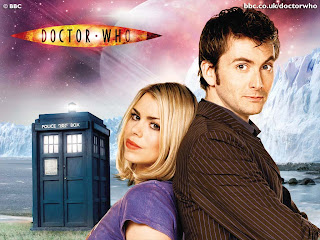 4. It can make me cry and laugh in the same episode. A mark of a good show.  Humor is a must in any series for me, but I need to care about the characters enough to feel moved when something triumphant or tragic happens to them.
5. There's not always a happily ever after, but always a satisfying ending. In a show like this, you know that not every companion gets to stay forever and The Doctor can't always save everyone.  But even when partings or deaths come, it's always in a way that leaves me satisfied.
6. I finally understand what British people mean when they say "Exterminate!" I've heard people doing the Dalek voice before and had no idea what was going on.  While it's not a life-changer, at least now it's not bugging me any more. 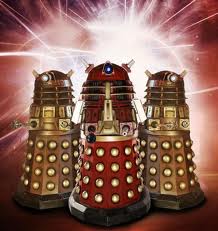 7. John Barrowman *girly sigh* I mean, just look at him!  You can also check him out in his own spin-off Torchwood (the first couple of seasons are on instant play on Netflix, too). 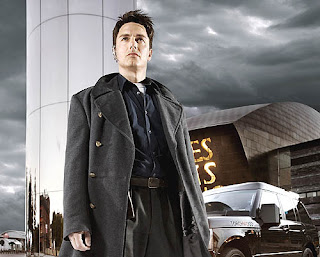 8. Some downright creepy/scary episodes. See season 1's "The Empty Child," season 2's "Fear Her," season 3's "Blink," season 4's "Silence in the Library" and "Midnight" for really good examples of the creepier side of the show.
9. A new ringtone. Yup, I'm that much of a geek.

Click here for Doctor Who theme song
10. The knowledge that good TV is still out there, even if it's in another country. There's a limit to the reality programs or 3 1/2 Men reruns I can scroll through before I loose faith in humanity.  Doctor Who has me holding on for a bit longer.
Posted by Witless Exposition at 8:58 PM

You are most certainly not alone in your love for The Doctor. I jumped in with both feet over the summer when I had some vacation time that my husband didn't share. Love, love, love it!

I've been meaning to write about it over on my blog, but I haven't found the time yet. :)

I don't know what I'm going to do once I'm current with the series. It'll be so hard to wait for each one as it actually airs!

The cool thing is that there's a pretty active fan club in my area, so even if my husband doesn't share my love there are others that do. :)