Gamer Girl Tuesday: In which the worlds collide

Before I get too far started, a plug: My husband, The Bear Monk, has started his own gaming blog about being an Elemental Shaman in WoW, Riding the Lightning.

I've always known that I was a nerd (or geek if you prefer the term), but I've always been a hard type to pin down.  I don't like fantasy novels in general, but love movies like Willow and Legend.  I love doing crafty, girlie projects, but really hate most romantic comedies.  I love playing games like Silent Hill, but don't have enough dexterity to really hit it big in gaming.

So my geeky universe is pretty disjointed to the point that different groups of friends feed my different eccentricities.

Well today, I came across something that shatters the borders of two of my nerd zones: Doctor Who and Gaming. 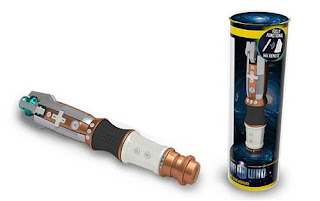 Yes, dear online minions, that is in fact a Sonic Screwdriver Wii remote. It's currently only sold in England or as an import.

My only question now is: will it work in the US?
Posted by Witless Exposition at 2:36 PM

Love Willow and Legend, too, yet my dexterity is also lacking. We should form a club. ;)

I've never gotten into Dr. Who, but I came home yesterday to find my husband watching a certain movie, and screamed, "You're watching Army of Darkness without ME?" If there was a boomstick remote, I'd be all over it.

i totally thoguht that was a sex toy to look at it pretty wicked stuff though!

@Tere, I think someone needs to create a boomstick now! I'd be all over that, too

@Cpt Pownzor, Yeah, now that I take a second look at it...I know some pretty intense Doctor Who fans. We might not want to give them ideas.