I've started playing Assassin's Creed Brotherhood this week (when not hiding under the covers from the cold), and I'm not really far enough through to review it or something actually constructive like that.

So instead, I'm going to make a short list of things that I've learned about myself, gaming, or whatever I feel like from my time playing:

1. I will never be able to see/hear Kristen Bell without thinking of her as Elle and getting pissed at the writers of Heroes for throwing away the potential for a great character arc. (Sorry fans of Veronica Mars, I came across her on Heroes first)

2. I could never be an assassin in real life, because I have terrible instincts.  When running from the guards, I always run the way that lands me right in the middle of lots of other guards.

3. I love the name Desmond, but after these games and Lost, I could never name my son that.  Another name sacrificed at the altar of entertainment.

4. Speaking of Desmond, he makes me think of Sam Witwer (who incidentally is showing up in everything!  I can't escape him!  Could he be our generations Kevin Bacon?) 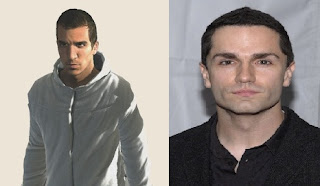 5. I'm still not sure how I feel about the free run ability.  When I am using it, I sometimes go in crazy directions I didn't mean to (jumping off a way too tall building because I leaned the L3 stick ever so slightly in the wrong direction), but if I don't use it, the running is slow and cumbersome in points.  I guess it's better to ere on the side of speed in a game like this, though.

6. I really don't like this whole long hold for one action and tap for another.  I'm used to games with much simpler control systems, so my brain is having a tough time keeping all the settings/motions in order.

7. Desmond's world sucks compared to Ezio's.  All of the "real world" side tasks are pretty boring (or at least they are as far as I've played).  I wonder if there are people that actually leave the animus and complete them?

A pretty short list, but I'm not that far into the game yet.  It's a new style of game than I'm used to, and half of my battle is getting used to the controls and the like (I'm also notoriously bad at platformers.  I blame my lack of developmental experience to Mario).

Do you have difficulty while switching game genres?  Do you ever explore other types of games?
Posted by Witless Exposition at 12:50 PM

I like to play the original Assassin's Creed. Haven't tried the Brotherhood, yet. I'm not much of a gamer, though. I used to play Prince of Persia, but the hubster would have to navigate me through the difficult parts because it couldn't get the hang of the controller. He's almost exclusively into Modern Warfare:Black Ops now. I've also played the Harry Potter games...couldn't fly on that darn broomstick to save my life, and NHL~Hockey. But my gaming nights are few and far between because I suck at playing the games.

I still have to play any of the Assassin's Creed games. I was looking at them in Gamestop the other day, but the first one is still $60 used *sigh*.

The game itself looks fantastic though.

And I am with you, whenever I see Kristen Bell I get pissed about that too. She was awesome. I've heard a rumour that she might be playing Elayna in the movie version of Uncharted though. I wouldn't mind her as that.

I could never be an assassin either. I'm way too loud and far too terrible at sneaking around.

@Kristal Lee--I usually have my husband help me through the platforming parts of games, and I help him with the puzzles. I'm determined to make it through Brotherhood on my own though. We'll see how long that lasts.

@Tabs--That's crazy that they're still that expensive! You could pick up any of the series and start playing. I've heard that the first one was notoriously hard and had some serious bugs, so the second one might be a better place to start.

Oh man...don't even bother with the first one. It's really not as much fun as it sounds. The second one is really the best place to start. It basically is everything you expected out of the first game (hearing the premise), but done right. The free running feature, while a little touchy sometimes makes the movement around the cities a lot more engaging and fun. I'd say skip part one, you're not missing any of the story anyway. Nothing thats not explained in the first 10 minutes of the second game and its by far more fun. Easily one of my favorite games on my PS3.

Welcome to the crusade, (your link had errors) but I found you anyway! Love your post! Glad I'm not the only one living in a fantasy world! LOL

I'm boring. I play jewelquest and spider. I think that's it.

Desmond would have some cool nicknames.

I love the background of your blog!

I played Assassin's Creed 1 and 2 and adored them both! If the controls are anything similar, it's like riding a bike--you get used to it after a while! Have had AC Brotherhood since last November, but *still* haven't played it! Too busy writing and blogging! You've got to let me know if you liked it!

P.S. Thanks for signing up for my Race to 200! And double thanks for advertising it on your sidebar! :)