When I started Gamer Girl Tuesday last week, I knew that Silent Hill would come up sooner or later.  I do have to say that I'm surprised that it came up this quickly.    But before I delve too much into the realm of gaming, I have to go back to what got me started.

I've briefly mentioned my fascination with Silent Hill before, but I wanted to go a little deeper this time.

You see, Silent Hill is what turned me on to gaming.  I'm still a casual player at best, but I never would have gotten into gaming at all if it wasn't for Silent Hill.

You see, until I married my husband, the extent of my gaming experience was my Commodore 64 and a light sprinkling of arcade games.  But my husband has been steeped in gaming systems and has seen all the variants.

He was desperate to get me interested in his hobby, but honestly wasn't too interested in it after watching him play through a couple of Final Fantasy games (which may be wonderful to play, but are boring to watch).  He pointed me in the direction of games he thought I might like, but nothing really clicked.

At some point, I either saw an review or picked up a copy of Silent Hill 3.  It caught my attention because it was horror based and had a female main character (still, sadly a rarity).  I took it home and started playing it.

And was terrified. (I was playing it at night, by myself as my husband worked the graveyard shift an hour and a half away).

And loved every minute of it!

The franchise itself has had ups and downs, and in all honesty I've never had quite the same reaction as I did to 3, but it's still a franchise I'm loyal to and get excited about when I hear about a new game coming out.

I've realized that this is turning into a bit of a ramble, so before it goes on too long, here's the main reasons that I remain such a fan of the series (even the crappy ones like Shattered Memories):

1. Incredibly creepy graphics, soundtrack, and ambiance to the game.


2.Difficult and fun puzzles to continue playing (there were times I really felt like MacGuyver).

3. Some of the scariest monsters I've ever seen in movie, game, or imagination. (Pyramid head, the baby vulture things, the ghost dogs, the scissor people, and the nurses, dear god the nurses.)

4. Little touches that don't really move the game forward, but add to the creepy vibe (finding blood scribbled messages on the walls, children's drawings left behind, mysterious voices calling to you from the shadows.) 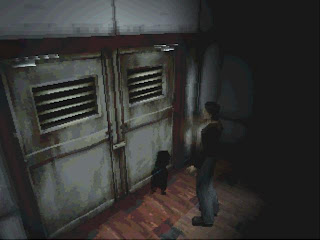 5. The game relies on the fear of anticipation as much as actual jumps. (Please, please, don't make me follow the trail of blood into that room)


And mostly, the way that the game sticks with you. I could only play Silent Hill 3 for about an hour when my husband was at work. Then I would have to watch something happy and funny on TV to get the shivers out of my system.


And now for your palate cleanser.

Posted by Witless Exposition at 4:15 PM

I don't know if I could play a game like that! I watched the movie Silent Hill and was pretty disturbed by some of the creepy burned children. Scary!! I think playing the game would be even scarier because instead of creeping out the actors, they're trying to scare you directly!

It is pretty intense. The movie did a good job of capturing the feel of the movie, so it's a good way to test and see if you'd like the games or not.

The whole distrubing psychology behind SH2 was like Law & Order: SVU meet HP Lovecraft. Which is why I loved it so much, haha!

The game really takes scary and twisted to a whole new, dark level. I always enjoy it.

I eventually will be getting the latest one for the Wii.

I'm actually about halfway through the Wii version and will be reviewing it soon. Some really good things and some pretty meh things. But overall worth the purchase, especially if you're a fan of the franchise.

"palate cleanser" LOVE it :) ...ooh, and your yahoo contributions are totally addictive!