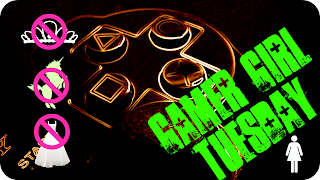 Finally a 100% happy review!  If you want to skip the fan girl drooling, just know that I recommend this game fully.  If you want to see how much I really can geek out, feel free to continue.

Plot:
It's always hard to nail down a plot for an MMO, but I'll give it a shot.  Lex Luthor from the future has come to Earth to warn the heroes of the JLA that Braniac is coming.

Exobytes have been released giving random people powers, and Braniac is right behind gathering them up.  You are one of those heroes/villains (depending on your temperament).  And now you're off to bring justice or chaos to the streets of Metropolis and Gotham.

Unique Details:
You get to be a superhero or villain.  No really.  If you've ever been a fan of comics (or comic book movies, or even remotely attracted to the idea of comics) you'll get a huge kick out of this game.  A lot of the creative designers work for DC itself (including the great Jim Lee), so it has the feel of the comics come to life.

One of the things that I'm really loving about DC Universe is that your character's looks are completely customizable.  So you really feel that the character is yours, and not just a clone of a standard type.  You can control the details down to the colors and the type of belt you have.

There's also a wide range of customization when it comes to your powers and weapons.  There are six super power types and ten weapon types.  (I'll let someone with better math skills do the work to see how many possibilities there are.)

Since it's a new MMO, there's not as much of the rigid "you're not doing it right" types of gameplay discussions as with other more established games *coughWorldofWarcraftcough*  It's also a very alt (a side character that you play periodically) friendly game, so you can always switch things up when you're getting bored.

The creators have already released some new content, and are saying that they plan to do this every month.  (Which is good, because hitting the level cap doesn't take very long).  So there's always something new waiting for you around the corner.

Gameplay and Controls (I'm playing the PC version. So I can't speak for the PS3 experience)
It's still a new game, so there are some buggy issues to work out.  I've already managed to fall through the map twice.  Don't ask, I have bad luck with that (I've even done it on WoW). The biggest bug I've run across is the auto-targeting system.  Sometimes it'll ignore the monster wailing away at you and have you focusing an a barrel across the street.  But if you pay attention, you'll learn to work around this bug.

Imagine a hack and slash type game like God of War meeting WoW and that's basically what you have.  You have super powers linked to key numbers, and your weapons combos are linked to your mouse.  One of the great things about the game is that you feel more active than in other MMOs.  Since there's not auto-attack and you have to keep frantically mashing buttons, it feels like you're actually doing something.

Overall:
I really can't recommend this game enough.  I know that the subscription (about $15 a month) will keep some people away from it forever, but if you give it the free month, you'll be surprised by how much you enjoy it.

If you do want to give it a go, the husband and I play on the Brave New World server.  My main character's name is Emerald Destiny.  Doesn't she look bad-ass? 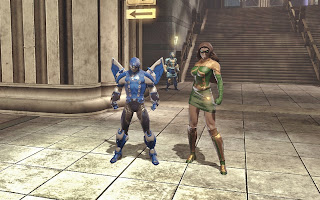 Oh yeah, and the guy beside me is Azario (my husband).  This is officially the only time I will ever be taller than him.

I have a sneaky suspicion you'll be hearing more about the game, soon.
Posted by Witless Exposition at 8:00 AM

I'm also stressing about "X". Found you from the A-Z Challenge, it sounds like it’s going to be so much fun and I can’t wait to get started!! I’m now following your blog on GFC and I hope you have a chance to check out my blog and maybe follow me back!!
Monica
http://oldermommystillyummy.blogspot.com/