A to Z Challenge: In Print?

There's something about second hand bookstores that always gets me excited.  There's always a great deal to be found, but let me tell you what really gets me going.

The popular In print books?

Nope, I head straight for the bizarre out of print books.

There usually found in the paperback section, more often than not in the sci-fi or horror section.  If you're lucky you can get them for less than a dollar.

After reading them, I find that there's a reason I've never heard of the authors or the books are out of print.  But the premises are so campy and over the top that it's always a fun ride.

One of my new finds that I'm excited to try is The Illegal Rebirth of Billy the Kid by Rebecca Ore. 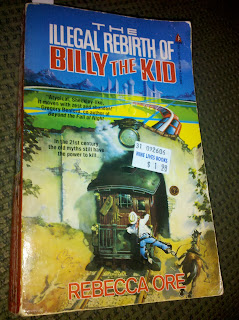 Blurb from the back:

"Most of Simon's chimeras are legal, for the CIA. But Simon's got a sideline, too: chimeras based on famous criminals, for rent, to private citizens...whatever your pleasure.  His Billy-the-Kid chimera's especially popular, particularly the part where Simon--as 'Pat Garrett'--guns 'Billy' down at the moment of truth.  Billy doesn't even know he's in the 21st century; Simon's got him programmed to see everything in Old West terms.

"Then one of Simon's clients absconds with Billy and sets him loose--helpless--on the 21st century's mean streets.  With the CIA on Simon's tail and Billy struggling to seize control of the myths in his ROM, 'Pat Garrett' had better start running--because this time around, the old story may well have a new ending."

So, whenever you're looking for a new book, don't discount the out of print cheap finds at your local second hand bookstore.

Posted by Witless Exposition at 8:00 AM

Email ThisBlogThis!Share to TwitterShare to FacebookShare to Pinterest
Labels: a to z challenge, geeky, out of print, sci-fi

I agree, i love a 2nd hand bookshop. I use abebooks online if i know what I'm looking for, but stumbling across some never before heard of gem is a great feeling. Charity shops are good for that too.
regards
mood
Moody Writing

Second hand bookshops are intriguing and fun to me as well... it's enjoyable to find a rare treasure. I love books :)

The last time I went to the second hand store, I got me some good Nora Roberts on the cheap.

I could spend all day in a used bookstore. Unfortunately, we don't have good ones around here. I am so afraid they are going to be even harder to find as e-books and technology take over the world.

I love 2nd hand bookshops too. There's one near here where you can get a free mug of filter coffee while you browse. What better way is there to spend a morning?

Holy cow that does sound awesome!! What a cool concept.