Today I'm doing a game review, but it's a different type of game review than I've normally done.

You only need the board and a group of friends to play this one.  Yup, we're going old school today.

We have a group of friends that periodically meets to play board games.  Sometimes it's the standards like uno, but most of the time it's something a bit more...exotic than the average Monopoly game.

This past week we played a game called Bump in the Night.  The premise of the game is that you're a group of monsters that lives in a haunted house.  A group of young girls has wandered in, and it's your job to scare the bejezzus out of them to the point where they pass out or run out of the house. 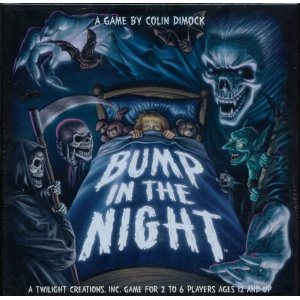 Sounds like a bit of guilty fun doesn't it?

Overall, I do have to say it was a lot of fun.

Once we got started.  The thing with this game is that the directions aren't always the clearest, to the point that people have gone online and written their own clarified rules.  You will have to end up creating some house rules on some of the more confusing rules, but once you have those in place you'll roll along pretty quickly.

The game can run very quickly or long, based on how vindictive your particular crowd is.  We didn't behave too badly, so the game lasted about an hour.

It does take a little bit of strategy and thinking to get everything just right to terrify the girls, but the good news is that you can't really die.  So it's a pretty even playing field, and you don't have to worry about someone getting knocked out of the game really early.

This is a really fun game, that with some patience the first couple of times you play will really be a good group game.  Best for quirky groups that want to get together and play something beyond Sorry or heaven help us, Risk.

What types of group games do you play?  Board games like this or more traditional?


Posted by Witless Exposition at 6:00 AM

Email ThisBlogThis!Share to TwitterShare to FacebookShare to Pinterest
Labels: board games, Bump in the Night, Geeky Girl, getting together

I think I like it more than you...but that may have something to do with the fact that I won.

That sounds fun! Can two people play? We have a few games that are involved, like Titanic, although I'm always up for movie or music trivia.

Oh gosh this does sound fun!!! I organize games for a youth group and I can see them going nuts for this!