So for the next couple of weeks, I may sound like a broken record.  Until the end of the DC relaunch, Tuesdays will be devoted to reviewing the ones that I've read and really enjoyed.

For more info on the relaunch and a view of what I've read so far, check out part one.

This week, it was (mostly) all about the ladies. I was really excited about several of these, and for the most part they didn't disappoint.

Good news: if you've missed any of The New 52, DC is issuing reprints each week, so there's still a way to get your hands on a physical copy (or if you don't mind, DC is selling digital copies as well). 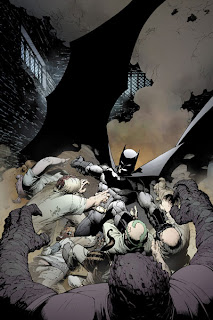 I know, I've already written about one Batman comic.  Batman is the largest franchise DC has, so there are actually several featuring Batty himself...but this one has Robin too, (and in one scene Robins-yup more than one). Less gruesome than Detective comics, and probably more along the lines of what most people expect from Batman.

Artwork: 4/5--Some good action scenes, and great title page.  Very angular characters (Batman's huge chin will probably start to get on my nerves).
Story: 4.5/5--Some good groundwork, a nice introduction to all of the main players and a twist at the end that has some interesting potential for the rest of this arc.
Potential: 4.5/5--While I still liked Detective Comics better, this one is still a heavy contender and one I'll keep following.
Total: 4.3 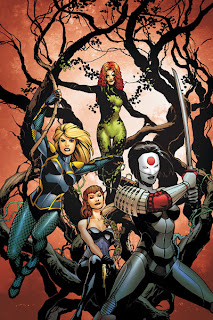 I wasn't sure how I'd feel about this one since so many of the players have changed.  But we still have Black Canary, and I'm very interested to see how they'll work Poison Ivy into being a heroine.  Another "getting the team together" title, which is good since the average person won't know all the people on the final team.

Artwork: 3.5/4--I tend to prefer the rougher look of a more hand-drawn style as opposed to the slick air-brushed look of Birds.  The figures are all well done, and aren't so over the top sexualized, which was nice.
Story: 4/5--I'm all about starting in media res, and I liked the action of this one, but I felt that Starling was left out in the cold a bit.  I still know nothing about what makes her tick.
Potential: 4/5--I'll keep following this one at least until the team's together.  If the characterization is still a problem, I'll probably let this one drop.
Total: 3.8 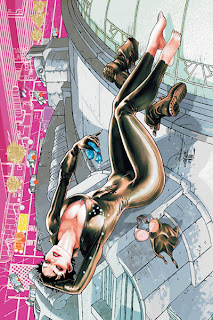 Being such a fan of Gotham City Sirens (alas, I barely got to know them), I was really excited about this title. Not so much of a story as a character sketch of Selina, it's still a good one to pick up.  Plus it's got some seriously sexy pages for those lonely nights.

Artwork: 5/5--Sexy, violent, and at times funny, the artwork is a perfect reflection of the character.
Story: 4.5/5--I have no real feeling for where the story is going, but it was a great introduction to a character that many may just know as Eartha Kitt or Michelle Pfeiffer.
Potential: 4.5/5--If nothing else, you'll want to know what happens the morning after.  Definitely one I'll keep following.
Total: 4.7 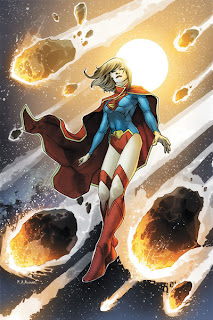 I'll be honest, I've never followed Supergirl before, and my only real exposure was the 1980s movie. But with the relaunch, I wanted to support as many female characters as I could, so I picked it up.  A great place to start as it is a traditional origin story, no back knowledge needed.


Artwork: 4.5/5--I'm still not in love with the cover, but the inside is great.  The redesign of her costume fits with the uniform idea thrown around.  The final splash page is a real treat as well.
Story: 5/5--I love how you're thrown into the confusion of Kara as she wakes up on this strange world and discovers her powers for the first time.  No happy bunny exploration though, this is a chaotic discovery.
Potential: 5/5--I can't wait to see where this goes from here.
Total: 4.8 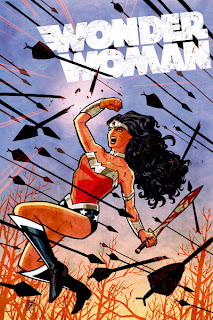 The one that almost got away, there were literally no copies to be had in town on release day. Luckily we were able to go online and order it and still read it opening week.  Not as good as I had hoped, but still a good title.


Artwork: 3.5/5--I was worried as soon as I saw the teaser cover.  The artwork inside is very Saturday morning cartoon.  However there are a few panels here and there that I really loved.
Story: 4/5--While I really enjoyed it (and all the Greek mythology thrown in), it could be hard to follow if someone didn't know much about Diana or her ties to Greek roots.
Potential: 5/5--What can I say, I'll stick with this no matter how bad it gets. But, the story looks promising, so I'm keeping my hopes up.
Total: 4.2

Have you picked up any new comics lately?  Which ones interest you?
Posted by Witless Exposition at 6:00 AM

So lets see...I think I like Batman more than you did. *GASP* I loved the splash page with all the Robins.

I was kind of "meh" on Birds of Prey as well. While I thought it was well drawn and had good action scenes it was a little bit lacking in the story department. That may be because I knew little to nothing about these characters going in.

As a man I had to like Catwoman...there's boobies everywhere for God's sake. I did enjoy the introductory nature of this comic though. You basically get the Catwoman summary in this book and it's definitely not bad.

Supergirl...Personally I think this was the best chick comic. I loved the cover art...it's half the reason I wanted to pick it up. There's nothing I didn't like about this book.

Overall I liked Wonder Woman. I have to say I didn't like the style of the art on the cover that much but the blending of styles on the pages was actually pretty nice. I thought the softer edges of the characters on the hard angled background made it very visually interesting. But I'd have to agree that the story would have been a little confusing had I not read some Wonder Woman previously. But than again...who hasn't read a little Wonder Woman that picked this up?

I stopped reading Super Girl a while back cause she was too whiny and emo. It was just like get over it.. your cousin > than you.

But, for girl power you should definitely check out Jennifer Blood.

@Bear--I thought the touch with the Robins was really good. I enjoyed it, but I think you liked it better.

@Christian--So far, she seems a lot more grown up and capable than I've seen her in the past. I'm hoping it continues on that trend. Thanks for the recommendation. I'll have to check out Jennifer Blood.

I haven't started any new comics in a while. I do always drop a large amount of money every time I visit the Source, so I try not visit too often. LOL! I'm so behind on the comics I do read, but I'd rather be behind than ahead. I hate waiting.