Review of To Your Scattered Bodies Go by Philip Jose Farmer 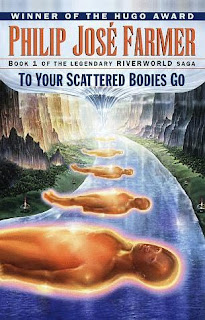 First let me the you the rundown of how I came to read To Your Scattered Bodies Go.  Based on previous ratings and genres you like, Netflix gives you suggestions.  Well, it was being really insistent that I would love this movie called Riverworld.  I read the premise and it sounded interesting enough, so I gave it a go.

I only gave it about 30 minutes, and then gave up.  I read a couple of reviews and saw that it was based on the third book of the Riverworld series.  So I hunted down a copy at the library and gave it a go.

I think I should have learned my lesson from the movie version.

Plot 5/10 (With a mercy point for premise) 6/10
Sir Richard Francis Burton, a famous nineteenth century explorer, awakens after his death to find himself an a strange new world.  It is similar to Earth except for a few things: the entire planet seems to be covered in one giant river, he is years younger and in perfect health, and the entire history of humanity (including neanderthals) has been resurrected.

Burton quickly gathers a motley crew around him to try and find the origin of the river and the reason why everyone has been given a second chance.

Sounds like a great premise, huh?  I know, it had me hooked, too.  The problem is, there's not really much of a plot.  It's a short book (216 pages), but it covers seven years.  In that seven years, there's really only a bare minimum of plot.  Most of it is simply Burton and his crew traveling from place to place.  It's not until about halfway through the book that we get a character that could be seen as a solid antagonist or even an understanding of where the plot might be going.

The plot feels like a long boring road trip, even though they are randomly attacked, so there should be some suspense.


Characters 4/10
There's really only one character in the whole novel: Burton.  Everyone else is simply a placeholder.  We have a history buff to fill us in on all the real-life characters we meet.  There's a Holocaust survivor to add drama when we meet Herman Goring and allow Burton to explain his real-life Antisemitism. (Although the author does a little bit of Antisemitic stereotyping in the novel himself.  Did you know that all Jewish women are shrews?) There's a string of beautiful women that Burton sleeps with (who are all resurrected as virgins), and one that he loves for no reason other than she's beautiful and snubs him.  There's even a small girl to help show that Burton isn't as hard as he seems, he has a softer, protective side.

Even the Neanderthal and an Alien that died on Earth are bland and boring.  There's so much potential here for great characters.  I mean, you have EVERY SINGLE PERSON THAT"S EVER LIVED at your fingertips! You could actually have Ghandi get into a fistfight, a duet between Hendrix and Joplin, and finally get to see if Anne Boleyn is the slut she's always portrayed as.  Instead we're stuck with stuffy boring characters that never come to life.


Writing Style 3/10
My main issue with the writing style was that it was too detailed on issues that didn't matter.

We get way too much detail about physical characteristics and settings.  For example, here's the description the first time we see Tau Ceti (the alien from the future):


I get the point that he's like nothing Burton's ever seen.  But we don't get a shocked "Holy Crap, What is that?" from Burton.  Instead we get a calm cataloging of his physical description.  Down to the scrotum.  Do we really need to know what alien balls look like?

We also get a data dump on every real-life character we meet. In one scene, several characters, including Goring, are debating if they are still who they were when they were on Earth, or if they are copies (the word clone is never mentioned, but that's what they're batting around).  One character is trying to explain this to Goring.


I was going to type out the whole speech, but realized it goes on for 12 lines.  And you get the point from that one sentence.

However, the lack of overarching plot, character development, or emotional attachment to ANY of the characters made this book feel like a chore to read.

This book has made me question the selectivity of the Hugo Awards.  Really, this was the best they could find?


Sorry this turned into a bit of a rant.  If you love the book, I apologize for offending you.  If you have any other suggestions that will restore my faith in the genre of sci-fi, please feel free to leave them in the comments.
Posted by Witless Exposition at 3:16 PM