So a long time ago, I checked out a giant pile of books for my 101 in 1001 challenge, vowing to read and review them all.  In that amount of time I've only read one of them, and had to return the rest to the library, on threat of daily fines.  AND I've also read the latest installment of The Parasol Protectorate series by Gail Carriger.  So here's the quick and dirty reviews of both. 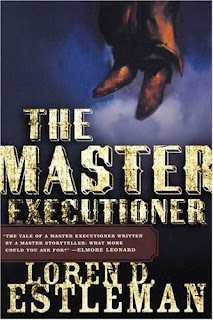 The Master Executioner was my random Western pick.  Oddly enough, it felt like less of a Western than the Mystery selection I chose.

Plotline in a sentence: Oscar stone starts out as a carpenter, but a failed marriage and odd apprenticeship later, he winds up as the best hangman around.

What I liked: All the information about hanging.  I know, sounds morbid, but it was actually really interesting (supposedly this author is big on research, so it's at least 80% accurate, I'd say).  I really liked that Oscar just wanted to give a good, clean death to the people.  He wasn't morbid or anything, he just didn't think anyone deserved a botched hanging.  The writing was very beautiful in spots as well.

What I didn't like: The plot, or lack thereof.  It's really just a long character sketch of Oscar.  The ending also felt tacked on, as if Estleman didn't know how to end it, so he drew it out of a melodramatic hat.  Really really melodramatic as opposed to the rest of the very logical, level-headed book. 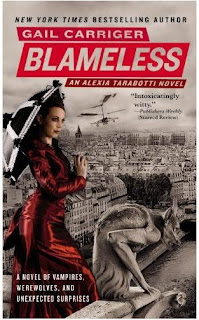 Blameless is the third novel in what is coming to be a really good Steampunk/Urban Fantasy/Mystery/Romance genre (I know, it's a mouthful, but Sufmr just sounds kinda dirty to me.

Since it's the third in a series:
Spoilers
Will
Undoubtedly
Follow!

Plotline in a sentence: Alexia rushes off to Italy to find the Templars, possibly the only group that can prove she's pregnant by her werewolf husband, forcing him to take her back.

What I liked: Lots!  Alexia is feeling more like a real character (and less of a stereotype) more and more (if still a bit dense at times, especially about a certain French lesbian) as are many of the other characters (Ivy being in the forefront). The introduction of the Templars and the possibilities of the baby make me really excited for the next book.  Those of you who disliked the ending of the second will find a lot of that explained away and dealt with pretty nicely.  (Sorry about all the parenthesis, I tend to be too liberal with them the sleepier I get).

What I didn't like: The big reveal about the baby and what it may or may not be felt really rushed to me, and in all actuality, I'm not sure I understand it.  However, I'm sure that's what the next book will be about.

So there you go guys, hope these help narrow down (or broaden (oops...sorry again)) you're reading horizons!  Until later!
Posted by Witless Exposition at 10:17 PM

Email ThisBlogThis!Share to TwitterShare to FacebookShare to Pinterest
Labels: 101 in 1001, Blameless, book review, gail carriger, The Master Executioner, the random things I read