You may have not realized this by now (or if you haven't read this or this), but I'm a pretty big Wonder Woman fan.  I've read as many of the comics as I can get my hands on, and I'm enjoying (with some reservations) the new relaunch of the comic.

However, when I heard about NBC creating a new Wonder Woman show, I have to admit, I was worried.  Instead of a long rant, I'll try to keep my points succinct. 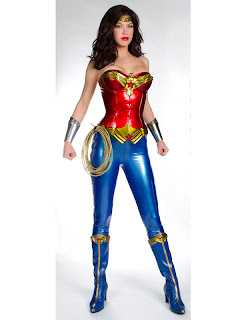 I'm still going to give the show a chance.  And if it's like Smallville, I'll grin and bear it through multiple seasons, too (if it gets the chance).
Posted by Witless Exposition at 8:00 AM

Email ThisBlogThis!Share to TwitterShare to FacebookShare to Pinterest
Labels: geeking out, my two cents, Wonder Woman

I watched Wonder Woman as a kid and loved it. Watched it all the time. So this recreation of Wonder Woman has a lot to live up to--Linda Carter is a legend.

I'm willing to give it a chance. I'm curious now, but my feeling is mixed. I wonder how it will do.

Didn't know they were recreating this show--thanks for the heads up. And yes, her outfit is super shiny.

I'm definitely going to watch the Wonder Woman show but I don't like the costume. Maybe it will just have to grow on me some before I can accept it.

I was interested in the show until I found out NBC was involved, because I'm afraid that it's going to be another "The Cape." David E. Kelley makes me feel a little better about that, but I don't trust NBC's decision making skills.

@Angela, I didn't grow up watching Linda, but I know it has a lot to live up to. Maybe if enough people like us give it a chance the network might.

@Michael, if the show is good, I think the costume will grow on me pretty quickly. So I guess we just have to wait.

@JEFrits, my thoughts exactly (except for The Cape, I never got around to watching it). I don't really trust NBC, but we'll see what they do with it.

I love your site and as I browsed your blog I decided to award you the Powerful Woman Writer Award.

Go to http://astorybookworld.blogspot.com/p/awards.html and pick up your award.

It could be all right. I liked the Superman series with Terri Hatcher. Sometimes super hero shows can be good television. I'll definitely give it a go.