I thought with my inaugural post for Geeky Girl Tuesday, I would start off with what is one of my geekiest obsessions, but also one of the most successful blog topics: Doctor Who.

The newest season of Doctor Who returned after a summer hiatus this Saturday with the brand new episode "Let's Kill Hitler."

While trying to keep away from spoilers and reviewing the episode in general (there are more than enough more qualified people than I doing this out there on the web), I really thought this episode deserved a little spotlight on my blog.  This episode was a great example of why I think Doctor Who has really taken off in America under the current writing of Steven Moffat. 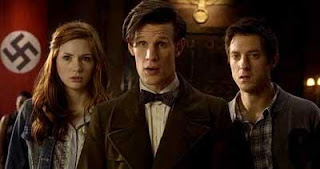 If you're a Doctor Who fan, I'd like to hear what you think about how this season is going.  Do you like the big twists we're seeing along the way?

If you're not a fan, check out episodes on Netflix or Amazon Prime and see what you're missing.  I promise your geeky side will thank you.

Posted by Witless Exposition at 4:00 AM

When I lived in England a lot of my friends there really loved Dr. Who. I've never seen it, but I should probably check it out. I like following a good series.

I don't watch the show, but Tennent was great in the Fright Night remake!

Hi again! I'm a huge NewWho fan, and I've been loving this season so far, even though it's been a bit twistier than I'm comfy with - but some of the best stuff happens when you're not comfy.

One of my favorite things is that before it's halfway through, EVERYBODY has forgotten that Hitler's still shut up in the cupboard, and they never come back for him.

And yes, Amy and Rory do very well together as companions, don't they? I'm looking forward to the rest of the season, and hope that they're back next year.

Congratulations! You've been featured in my semi-regular blog spotlight.