But life has been changing quite a lot.  The new job is humming along nicely (nothing life changing, and it's not what I want to be when I grow up, but it pays the bills.

The biggest change is this little one: 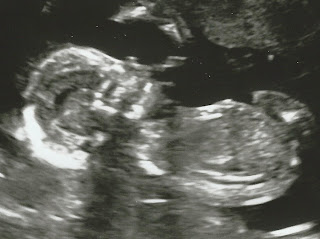 Yup, that's right.  The Bear Monk and I are expecting a little one around the end of this year.  We've already found out that we're having a girl (because God has a sense of humor) and things are going really well so far.

With that new urge, I'm going to start trying to blog more regularly and even start writing on the several in progress projects I have going on at the moment.

I plan on blogging at least Tuesday through Thursday, with a few extra posts here and there along the way.  Right now, look for the following pattern to emerge:

Geeky Girl Tuesday
What was once just Gamer Girl Tuesday is being expanded into a wider range of my geeky pursuits.  Expect TV reviews, comic rants, and yes even the occasional game review.

Word Slinging
Tips on becoming better at "the craft." Sometimes from my own experience and others from folks with more expertise (and also hopefully the occasional interview.  Let me know if you're interested).

Prize in the Serial
If you've been following the blog for a while, you may remember my serial story "Taking Liberty."  I'm going to finish the story (I promise!) using the help of Three Word Wednesday.  I'll be posting  on Thursdays to give myself a little extra time.  After I finish "Taking Liberty," I plan on continuing the serial format with other story ideas. Keep an eye out for exciting announcements along the way.

Thanks for those of you that have stuck it out with me.  I hope this is the start of something fun and exciting for all involved.
Posted by Witless Exposition at 5:46 PM

Aw, congrats on the pregnancy! And the newfound desire to write again. :)

Aww such happy times for y'all! Congrats :)

Awww!! Congrats!! And I'm so glad to see you're still alive...I was beginning to wonder!

I'm really glad you've rekindled your passion my dear...oh and that whole baby thing is pretty okay too.

Congrats! Boy, your life will be changing rapidly, but change is the only thing we can be sure of.