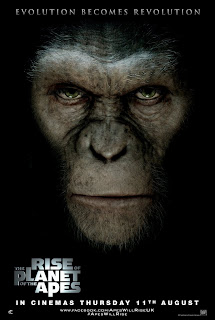 So this past Sunday, the Bear and I finally got around to seeing Rise of the Planet of the Apes.

I have to say I unequivocally loved it.

Was it a bit cheesy in parts, yes.  And you did have to suspend some belief (or takes some things for granted) in the final act, but everything leading up to that point made you willing to go with them.

The CGI work on Caesar was amazing, and he really felt like a genuine character to me, even more than Gollum did in the LOTR movies.

There were lots of little nods to the original film that you would miss if you weren't a dorky fan like I am. But there were also some great big nods (just wait for the scene with the "damn, dirty apes" line and see if it doesn't grab you).

And the groundwork they laid to bring about the fall of mankind was well thought out, and plausible in the world of the movie.

I'm telling you, it's enough to make me forget that Mark Wahlberg ever made a PotA movie.

It does make me really nervous about Chips Ahoy though.  They're the cookies of the revolution.
Posted by Witless Exposition at 12:41 PM

I also loved it. The show is great.

Andy Serkis deserves an Oscar nod for his performance. I really dug this movie and I went in prepared to hate it.

I concur! My brother and I both loved this movie and thought Any Serkis was amazing.